i was driving around in the car yesterday listening to the radio and "since u been gone" by kelly clarkson came on. naturally, i turned it up really loud because i love that song. i don't know why, but every time i hear that song on the radio i feel good. i'm not joking when i say that i sometimes get goose bumps from it. as this was happening i started to wonder why that is, why of all dumb pop songs, it's that one. is it because there is a weird feedback-y part of it? is there feedback and distorted guitar and big stupid drums in other kelly clarkson songs? i was wondering if when i was younger listening to a lot of aggressive and loud music that some of those sounds got imprinted on my brain and then when kelly clarkson's "since u been gone" co-opted some of those sounds it triggered some endorphin explosion in my spine. when i got home i looked up that video on youtube and... it sucked. i hate that video. it might have ruined the song for me. i won't even link to it on this blog. i realized the magic was in my head and when it took a visual form, it sucked the wind out. you can tell she's faking it, man. and at the end she steals a dumb hat and uses it as a disguise? what a drag. if i had made that video it would have just been slow motion footage of someone stepping on a hamburger and slipping on it, all the ingredients squirting out onto a squirrel's face. or one of those wrecking balls smashing into a building but instead of  a wrecking ball it is a cleverly camouflaged water balloon filled with turquoise paint that explodes into somebody's window, also in slow motion. or simply a dog running in a field, wild and free. except the dog is wearing a top hat and a monocle. but now the kelly clarkson song is ruined for me. but feel free to hit me up for any music video direction needs you might have, as i am full of ideas, musicians (rich only).
here are some sketches of my video ideas in case you have trouble visualizing. maybe you could mke up a song that goes with one of them? perfect. 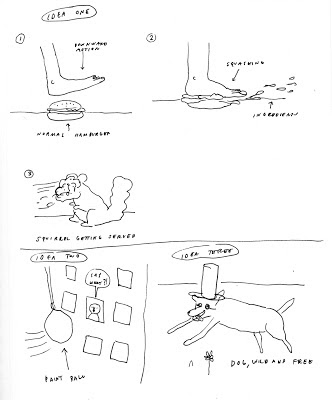 in brighter news, i am excited for the new devendra banhart record that is coming out because i really like the song below. i also appreciate that the video is just  a picture of a painting. i am a fan of this song and the notes and words used within it.
i am working on some new drawings and i will resume putting pictures of things up here soon after i stop having music thoughts. thank you.
Posted by nathaniel russell at 5:38 AM