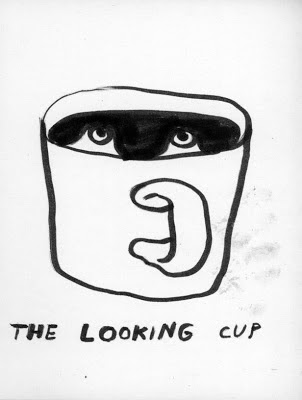 just a thing from a dream that would be cool as a sculpture or a puppet.
i am finding myself newly inspired and eye-opened after attending the show "riffing myself" by joel hodgson. he created Mystery Science Theater 3000 and his show is about him as a kid, doing magic, doing stand-up, his family, and the creation of that tv show he is most famous for. i've been in touch with  joel a little bit over the past few weeks and he invited me up to chicago to check out his performance. we hung out and talked and he included some of my fliers in the beginning of the show as sort of an opening act and i gotta say, it really blew my mind to see those things in a live show context. a new light shown down in my brain and windows of possibility have had their curtains opened. aside from that, joel's show is really really inspiring in the way that art should be. if he comes to your town you should go and get stoked and inspired and laugh until you almost barf, which i did. not barf, but almost, like really close. that puppet stuff always gets me. so consider this an endorsement: go to joel hodgson's show, look at the youtube videos, watch those episodes of MST3K because all that stuff is great.


Posted by nathaniel russell at 9:34 AM