graves of the week 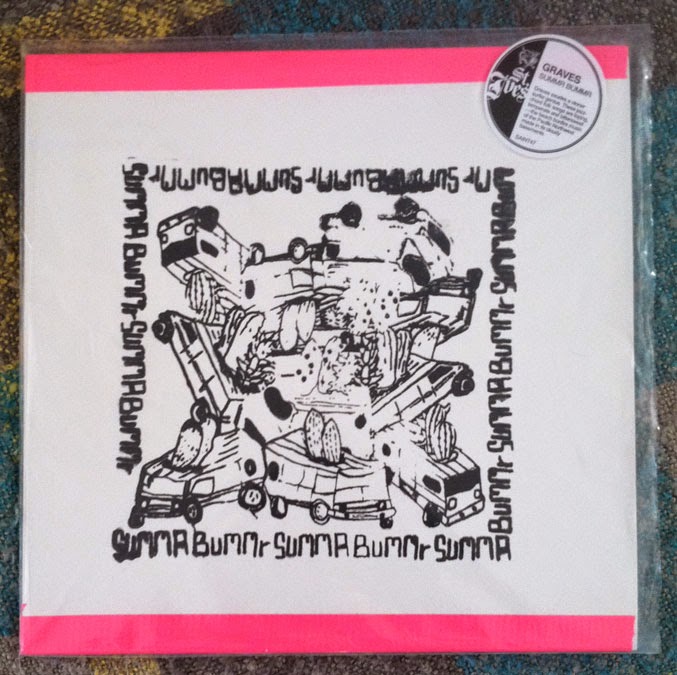 a few days ago i pulled this record (Graves "Summr Bummr") off the shelf and played it for the first time in a long time. i was drawn to it. and i've been playing it a lot the past few days while i'm drinking coffee or making dinner or playing with the kid. and now i am thinking about it and telling you about it. what a record. it's all the things i like about music and art: understated but thinking about the big things. it's not a crashing tidal wave it's a babbling brook. it's not a free ipad giveaway it's a dubbed tape you find in the shoebox. i can't stop listening to it.
this record came out on a label called st. ives, which was a sub-label of secretly canadian and their whole deal was letting the artists do whatever they wanted and they made the art out of old SC jackets turned inside out. they started when i was living in indiana the first time and i bought all the first run of things. some of them were by bands that would get more famous later and i ended up selling those st. ives records on ebay later to pay rent. which was awesome! but sometimes i wish i still had those records. but it sure was great to be able to pay rent.
back to Graves: they have a bunch of records and they are all of Graves, pieces of the puzzlei think. i recently went on Bandcamp and bought a tape called "gravesest hits" which is a collection from all the old records. i can appreciate that and i am appreciating it, and the tape will live in my car for a long time.
and this is what i am really into this week! i urge you to get into something this week! it helps! it works!


Posted by nathaniel russell at 7:05 AM